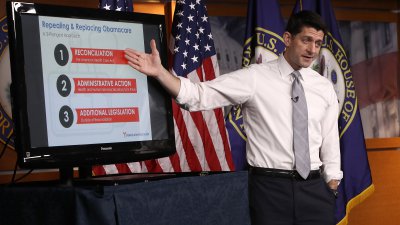 WASHINGTON — With Washington blanketed in a rare March snow, congressional GOP leaders and top aides to President Donald Trump got to work trying to salvage the legislation, which they hope to push through the House next week and the Senate the week after that. Trump has promised to sign the bill, fulfilling seven years of GOP promises to undo “Obamacare.”

Monday’s estimate by the Congressional Budget Office says the number of uninsured would grow to 24 million by 2026.

The CBO also says, the plan would reduce budget deficits by $337 billion over a decade. The largest savings would come from reductions for Medicaid, the federal-state health care program for low-income Americans, and elimination of Obama’s subsidies for individuals buying coverage.

The GOP legislation would use tax credits to help consumers buy health coverage, expand health savings accounts, phase out an expansion of Medicaid and cap that program for the future, end some requirements for health plans under Obama’s law, and scrap a number of taxes.