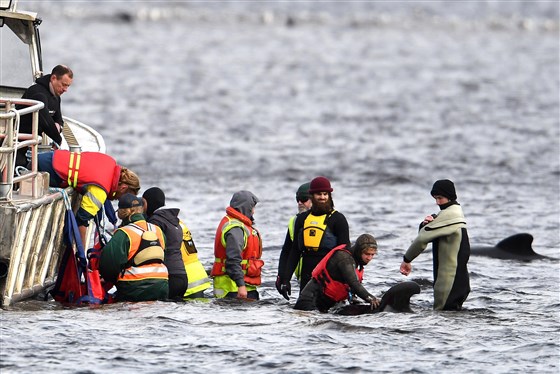 A rescue operation is underway to save any surviving pilot whales among the 500 or so stranded along the coast of the Australian island of Tasmania on Wednesday.

“Our focus is on those animals that are still alive,” Nic Deka, regional manager for Tasmania’s Parks and Wildlife Service, told a press conference. “The mortality has increased, but there are a significant number that are alive so we will continue to work with those.”

An estimated 270 whales were first found trapped on a sandbar on Monday. At least a third of them have already died while 25 were successfully refloated by rescuers.

Another 200 were discovered Wednesday in a bay just under six miles from where the first pod was discovered, Deka said. Overall, at least 380 whales have died and 50 have been rescued.

Crews were being sent out by boat to assess the situation, Deka added, but most rescuers would remain focused on the first pod.