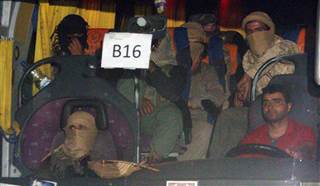 WASHINGTON — Coalition airstrikes stopped hundreds of ISIS militants and civilians Wednesday from moving from one threatened ISIS enclave in Syria to another hundreds of miles east.

ISIS had negotiated a ceasefire with Hezbollah, the Lebanese government and the Russian-backed Assad regime that included a deal to evacuate ISIS militants and their families from an enclave on the Lebanese border and move them — through Assad regime territory — to another ISIS-held area on the Iraqi border.

The U.S.-led coalition had not agreed to the evacuation plan.

“The Coalition was not a party to any agreement,” said U.S. Central Command (CENTCOM) in a statement. “Russian and pro-regime counter-ISIS words ring hollow when they cut deals with and allow terrorists to transit territory under their control.”

CENTCOM said in its statement that coalition aircraft cratered the road in front of the convoy to stop its movement but did not strike the convoy, which included women and children in buses.

According to CENTCOM, coalition planes instead struck nearby vehicles and fighters that were clearly identifiable as being with ISIS. The convoy had not reached its destination in the ISIS-held area of Abu Kamal along the Iraq border when the jets struck, U.S. military officials said Wednesday afternoon.