Controversial author Michael Wolff’s upcoming book, “Siege: Trump Under Fire,” reportedly claims that Robert Mueller drew up an obstruction of justice indictment against President Trump – but a spokesman for Mueller says the claim is wildly inaccurate. Now “Siege” already has something in common with its predecessor “Fire and Fury,” the 2018 best-selling book about […]

Attorney Michael Avenatti pleaded not guilty on Tuesday to accusations he defrauded his former client, adult-film star Stormy Daniels. Avenatti appeared before a federal judge on Tuesday in New York, according to CNN, where he faced charges of wire fraud and aggravated identity theft. He had been accused by Daniels of stealing $300,000. The embattled […]

Michigan State Police say a trooper found a dehydrated 6-month-old baby at a motel in the western part of the state in the same room with her dead parents. WOOD-TV reported that a cause of death wasn’t immediately clear and it may take weeks until toxicology results are in. The trooper discovered the bodies Friday […] 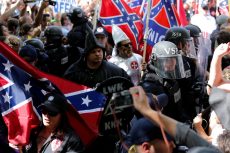 An Ohio city is estimating it spent about $650,000 on security for a rally attended by a small group of Ku Klux Klan members and hundreds of protesters. Dayton City Manager Shelley Dickstein says the city spent about $250,000 on personnel and about $400,000 on materials ahead of Saturday’s rally. Dickstein tells the Dayton Daily […]

The Department of Justice announced 17 new charges against Wikileaks founder Julian Assange on Thursday, including a virtually unprecedented move to charge him with publishing classified material — a move that could pose challenges to First Amendment protections. In a superseding indictment, a grand jury in Alexandria, Virginia, has accused Assange of breaking the law […]

Embattled attorney Michael Avenatti was charged by federal prosecutors in New York Wednesday with defrauding adult-film star Stormy Daniels, the client who propelled Avenatti into the national spotlight. Avenatti, 48, faces one count of wire fraud and one count of aggravated identity theft. He faces up to 22 years in prison if convicted of those […]

She loved her dog to death. Both of their deaths. A Virginia woman reportedly had her healthy dog euthanized so that it could be buried with her as a part of her last will and testament. Emma, a Shih Tzu mix, was brought to the Chesterfield Animal Shelter on March 8 after her unidentified owner […]

A dog named Ping Pong is being hailed as a hero in Thailand for helping save the life of a newborn baby after the infant’s 15-year-old mother tried to hide the birth by burying the boy alive. Ping Pong, who has only three working legs, was seen scratching at some dirt alongside a farmer’s field […]

Former Rep. Anthony Weiner, D-N.Y., was released from a Bronx halfway house Tuesday morning, marking the end of a prison sentence he began in 2017 for sending explicit text messages to an underage girl. Weiner did not discuss his plans, saying he is glad to get back to his family and to be putting this […] 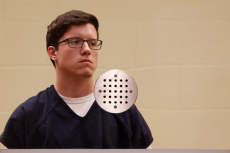 SAN DIEGO – The man suspected of killing a woman in a shooting at a Southern California synagogue pleaded not guilty to federal hate crime charges Tuesday. John T. Earnest spoke twice during the brief hearing — to acknowledge his name and to say he agreed with his court-appointed attorney’s decision against seeking bail. Earnest, […]