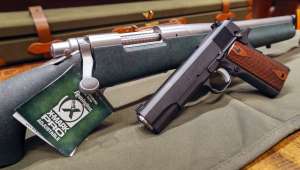 Remington, a company that began making flintlock rifles when there were only 19 United States, has filed for bankruptcy protection.

Mounting debts at the arms manufacturer have snowballed, ironically, since the election of Donald Trump, who has called himself a “true friend” to the gun industry.

Remington, which as roots dating to 1816, has lined up $100 million with lenders to continue operations. It remains unclear what will happen to its 3,500 or so employees as it reorganizes.

Panic sales that drove revenue for gun makers ever higher evaporated with Trump’s arrival in the White House. Fading sales and Remington’s production of one of the most well-known weapons in the world, the Bushmaster AR-15, have overwhelmed the Madison, North Carolina, company.

Late Sunday, according to records from the bankruptcy court of the district of Delaware, Remington Outdoor Co. agreed to a prepackaged deal that would give holders of the company’s $550 million term loan an 82.5 percent stake, according to a release.

Third-lien noteholders will take 17.5 percent of Remington and four-year warrants get a 15 percent stake.