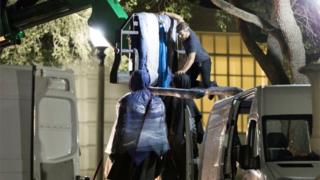 The University of Texas has removed four Confederate monuments overnight in the wake of violent clashes in Virginia earlier this month.

A statue of General Robert E Lee was among those taken down from the Austin campus early on Monday.

Monuments to Confederate figures are symbols of “modern white supremacy and neo-Nazism”, the college said.

A woman’s death at a far-right rally in Charlottesville has reignited debate over America’s racial legacy.

“Last week, the horrific displays of hatred at the University of Virginia and in Charlottesville shocked and saddened the nation,” University of Texas at Austin President Greg Fenves said on Sunday.

“These events make it clear, now more than ever, that Confederate monuments have become symbols of modern white supremacy and neo-Nazism.”

As well as Lee, who was military commander during the 1861-65 American Civil War, a statue of another rebel general, Albert Sidney Johnston, and of Confederate postmaster John H Reagan were taken down.

They were moved to a centre for American history on campus.