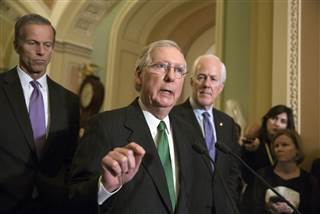 Democrats are within striking distance of retaking the Senate majority in November, while Republicans are facing an increasingly difficult electoral map as President Trump’s sagging poll numbers threaten to drag down vulnerable GOP incumbents.

Several recent polls show Democratic challengers leading Republican incumbents in Arizona, North Carolina and Iowa. The GOP is also fending off tough challenges in a handful of other states, including Colorado, Maine and Montana.

Democrats need three or four seats to win the Senate, depending on who wins the White House.