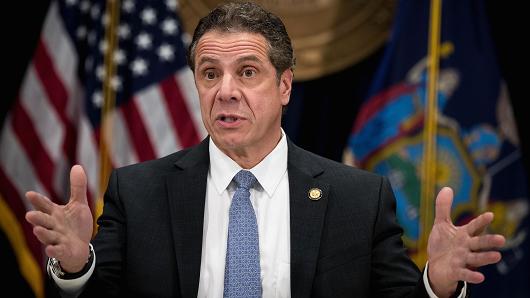 Three major states said Thursday they would form a “climate alliance” to work toward upholding the Paris accord after President Donald Trump said the U.S. would withdraw from the agreement.

In a statement, the governors of New York, California and Washington announced they will form a “coalition that will convene U.S. states committed to upholding” the deal and “taking aggressive action against climate change.”

The governors — whose three states account for almost a quarter of U.S. gross domestic product — said they are “committed” to meeting emissions goals set by the Paris deal and the Obama-era Clean Power Plan.

Trump said Thursday that the U.S. will withdraw from the landmark global agreement to curb carbon-dioxide emissions. The president also said he would start talks to re-enter the accord with what he called a more “fair” deal, but that idea was immediately shot down by several European governments.

Trump’s decision sets the world’s largest economy apart from almost all other nations on earth, and came in opposition to many large American companies, as well. Trump argued that complying with the deal unfairly put a burden on the U.S. economy and workers.

In statements, New York Gov. Andrew Cuomo, California Gov. Jerry Brown and Washington Gov. Jay Inslee said it falls on states to curb emissions following the Trump administration’s decision. They added that they would urge other states to join the group.