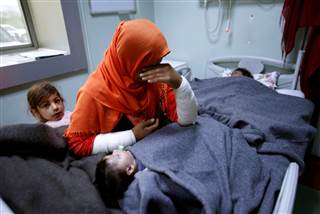 ISIS militants used chemical weapons during the battle for the city of Mosul last week, injuring a number of civilians, according to a senior Iraqi security official.

The official’s assessment comes after the International Committee of the Red Cross (ICRC), issued a statement last week saying that their workers had treated patients from Mosul who were suffering from symptoms consistent with exposure to a toxic chemical agent.

Over a number of days last week, the ICRC said it treated 15 such patients.

“The first cases who arrived were a mother and her five children, aged from 1 month to 11 years,” Iolanda Jaquemet, an ICRC spokeswoman, told NBC News.

“It was certainly [the result of] a toxic chemical agent, because their symptoms were absolutely clear. People had blisters, they vomited. They had irritation in the eyes and coughed,” she added.

The World Health Organization said in a statement that it was “extremely alarmed by the use of chemical weapons in Mosul, where innocent civilians are already facing unimaginable suffering.”