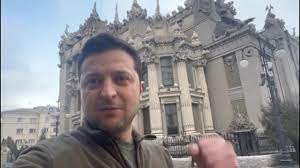 Kyiv remains under Ukrainian control as Ukraine President Volodymyr Zelenskyy refuses to leave his country on the third day of Russia’s invasion.

Russia started its advance into the capital city Friday night but appeared to make limited progress until early Saturday morning local time when gunfire could be heard in the city center. Government officials urged people to seek shelter and avoid going near windows or out onto balconies.

A British intelligence report Saturday claimed the bulk of Russian forces are now 18.5 miles (30 kilometers) from the capital city and that Russia has failed to gain control of the airspace over Ukraine, greatly reducing the Russian Air Force’s impact and potentially leveling the fight.