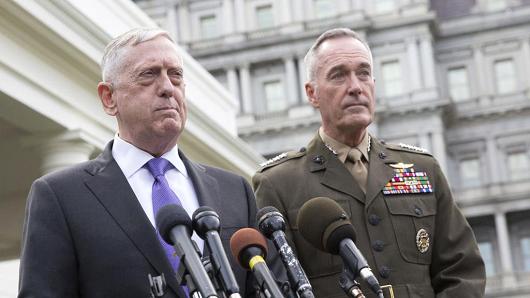 North Korea on Sunday conducted its sixth and most powerful nuclear test, which it said was of an advanced hydrogen bomb for a long-range missile, prompting the threat of a “massive” military response from the United States if it or its allies are threatened.

Speaking outside the White House after meeting with President Donald Trump and his national security team, U.S. Defense Secretary Jim Mattis said Trump asked to be briefed on all available military options.

“Any threat to the United States or its territories, including Guam or our allies will be met with a massive military response, a response both effective and overwhelming,” Mattis said.

It’s not clear what Mattis means by “threat.” North Korea regularly menaces the United States and its allies — it launched a missile over Japan last week and has verbally threatened South Korea, Australia and Guam in recent months.

“We are not looking to the total annihilation of a country, namely North Korea,” Mattis said with Joseph Dunford, the chairman of the Joint Chiefs of Staff, at his side. “But as I said, we have many options to do so.”