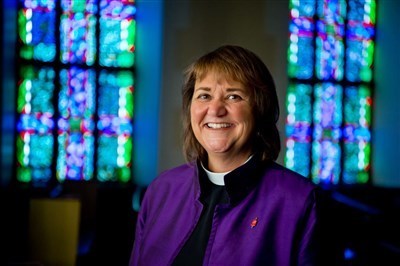 This decision comes as a shock to many both within and outside the United Methodist Church. Many have watched Karen Oliveto’s trajectory as a spirited minister at Glide Memorial Church, one of the UMC’s largest congregations, through the process of being elected and taking the office of Bishop in the Mountain Sky Area. She has served faithfully, skillfully, and honorably, a truly exemplary image of what it looks like to be a Bishop.

But tonight, in one swift ruling from the Judicial Council, Bishop Oliveto’s job is being placed on line as she is brought up on review, and ultimately will be removed and replaced. Not because she is unqualified, not because she has been unfaithful, but because she is openly LGBT+ and married to a woman.

In virtually any other sector of society, such a ruling would be seen as unethical at the least, if not illegal. Discriminating against an individual on the basis of their sexual orientation or gender identity is a fundamental assault on their dignity as a human being. Today, the United Methodist Church has solidified it’s place in history, siding with forces of discrimination and oppression against the LGBT+ community, an action that I am certain will be deeply mourned and regretted in the not too distant future.