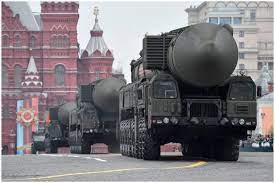 he invasion of Ukraine has driven a new ideological wedge between Moscow and Washington, leaving a majority of Russians and Americans fearing a nuclear exchange, new polling shows.

A survey published on Wednesday by the Chicago Council on Global Affairs and the Levada Center, Russia’s last independent pollster, found clear Cold War-like divisions among the publics of both countries, whose views of one another “have tanked.”

Along with overwhelmingly unfavorable views of each other’s leaders, the results also showed Russians and Americans were sorting countries into friendly or hostile geopolitical camps. Most concerning of all, however, was the mutual perception of a rising nuclear threat on both sides.