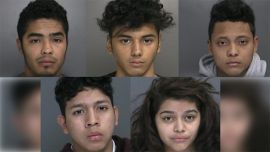 Long Island police say they foiled an MS-13 kidnapping and murder plot when they saw the intended 16-year-old male victim being coerced into a van.

President Trump went to Brentwood in July and vowed to crush MS-13, while pledging a tougher approach on immigration. “They have transformed peaceful parks and beautiful quiet neighborhoods into blood-stained killing fields,” he said about the gang. “They’re animals.”

Officers told Newsday that two of the suspects, Vidal Contrera-Ortiz, 18, and Miguel Rivera, 20, were illegal immigrants.