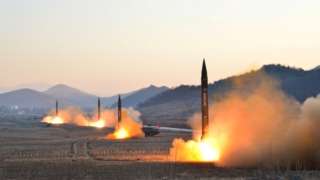 The US has said its policy of “strategic patience” with North Korea is over, and suggested it may decide to take pre-emptive military action.

Secretary of State Rex Tillerson said the option was “on the table” if the threat from the North’s weapons programme reached a level requiring it.

During a visit to South Korea, he also said the US was exploring a range of new diplomatic and economic measures.

He also defended the deployment of a US missile system in South Korea.

The move has angered China, but South Korea and the US say the system is needed to defend against North Korea.

He arrived in South Korea from Japan, where he said that 20 years of efforts aimed at persuading North Korea to abandon its nuclear ambitions had failed.

Asked if the possibility for military action existed, he said: “Certainly we do not want to, for things to get to military conflict.”

But he said: “If they elevate the threat of their weapons programme to a level that we believe requires action, then that option’s on the table.”

Mr Tillerson was blunt: the previous policy had ended. Despite that assertion, though, the difference between the Obama strategy and the Trump one isn’t obvious. Mr Obama had not ruled out military force and Mr Tillerson thinks sanctions might yet work.