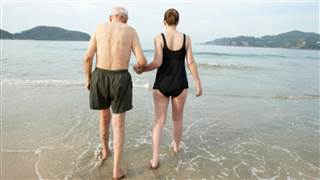 BISHOP, Calif. — When Jamie Moore arrived home on a Thursday evening in March, she was surprised to find her mother-in-law in her living room. Glenda Moore, 67, had been sitting in her wheelchair for hours. Without anyone to help her to the bathroom, she’d had an accident. She was also having trouble breathing. “It was awful,” Jamie Moore recalled.

Glenda Moore told Jamie that she had been discharged from the Bishop Care Center nursing home, in Bishop, California. She had been living at the nursing home — a sprawling brick building on the side of a state highway — for several weeks, recovering from a back surgery that unexpectedly left her unable to walk much or take care of herself.

Several days earlier, nursing home administrators had shown Glenda Moore a letter from Medicare, explaining that her rehabilitation coverage was ending. She was unable to pay the nursing home’s more-than-$7,000 monthly fee, so, thinking she had no other options, she left. (A relative dropped her off at Jamie’s home, where Glenda Moore had lived previously, without telling Jamie.)