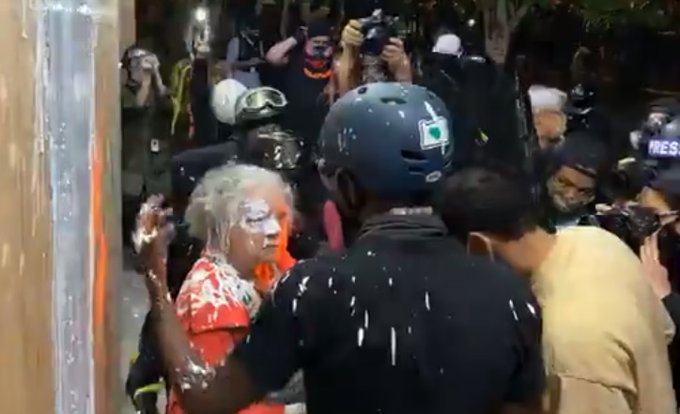 More than 65 nights of demonstrations carried on in areas of Portland, Ore., on Thursday night, just hours after the city’s mayor decried the unrest that has roiled Portland since George Floyd’s death.

A police officer was hurt and at least three elderly people who tried to thwart vandalism attempts were apparently targeted or blocked from doing so, police said early Friday.

Portland police declared an unlawful assembly outside a precinct shortly before 10 p.m. local time, and protesters were ordered to leave. Officials had said earlier they believed the intent of the crowd was to vandalize and burn the precinct.

Shortly thereafter, a group of protesters lit a garbage can on fire using “thank-you notes on blue hearts from community members which were affixed to the front of East Precinct,” police said Friday in an early morning press release. They then allegedly placed the garbage can against the front of the police precinct.

Moments later, as video shows, an elderly woman tried to extinguish the fire but was blocked by someone wearing dark clothing and a helmet.

“Several members of the group were spotted with cans of paint which were thrown towards East Precinct,” the press release states. “Two elderly community members attempted to stop the group from vandalizing the building with paint and were subsequently hit with the paint.”