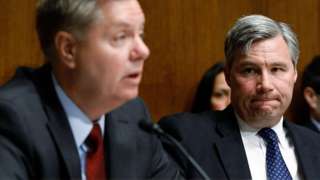 Two US senators have written to law enforcement to inquire if there is any evidence to support President Donald Trump’s claim that he was wiretapped.

Sheldon Whitehouse, a Democrat, and Republican Lindsey Graham sent the letter to the FBI on Wednesday.

They requested “any warrant applications and court orders… related to wiretaps of President Trump, the Trump campaign, or Trump Tower”.

Mr Trump tweeted the unsubstantiated claim over the weekend.

“Just found out that Obama had my ‘wires tapped’ in Trump Tower just before the victory,” he posted in a series of tweets on Saturday morning.

Mr Trump was reportedly in high spirits after making the broadside on Twitter, advisers told the New York Times.

But according to the newspaper, after a round of golf, Mr Trump seemed to think he had gone too far, though still maintained his phones had been tapped.

Despite repeated requests, the White House has not supplied any evidence for the claim.