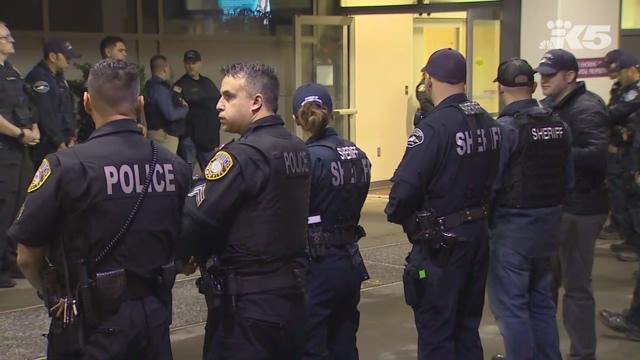 A Pierce County deputy has died after being shot responding to a robbery call near Spanaway, the Sheriff’s Department confirmed.

According to the Pierce County Sheriff’s Department, the deputy was shot just after 11:30 p.m. Sunday while responding to a 911 call for an intruder reported in a house on 200th Street East in the Frederickson area.

The deputy was the first person to arrive on scene. He began to pursue a suspect on foot and shots were fired at the deputy, striking him. He was transported to St. Joseph Medical Center in Tacoma where he died.

Pierce County Sheriff Paul Pastor identified the officer as 34-year-old Daniel McCartney of Yelm. Deputy McCartney was a Navy veteran and served the department for three years. He leaves behind a wife and three young boys, who are four, six, and nine years old.

It is with incredible sadness that inform you that our deputy has passed away from his injuries. We are with his family now, and we ask that you please keep his family, friends, and our department in your thoughts and prayers. pic.twitter.com/BMkKkE8qji