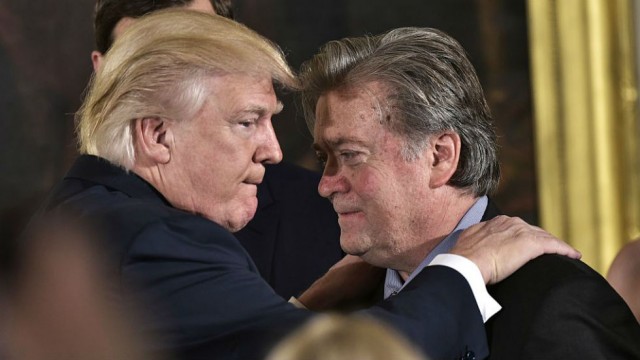 U.S. stock markets rallied and traders cheered Friday afternoon as the news of Stephen Bannon’s departure from the White House was learned.

CNBC aired a clip of a reporter and anchor discussing the news, where the cheers could be heard in the background.

After a morning of drooping stock prices, the Dow Jones rose 27 points in the minutes following the news, according to MarketWatch, while the S&P 500 gained 8 points and the NASDAQ composite index rose 30 points.

Oil prices rose, while traditional safe havens such as gold retreated, according to Bloomberg.

Bannon’s economic nationalism was often at odds with big business. He was a proponent of protectionist policies, argued for trade wars, and he pushed to reduce immigration, legal and otherwise.

He was also quick to label corporations as “globalist,” in their views, meaning that they supported free trade and immigration, which Bannon viewed as destructive to American workers.

Earlier in the week, a slew of business leaders and CEOs distances themselves from President Trump over his remarks blaming “both sides” for deadly violence at a white supremacist rally in Charlottesville, Va. Bannon was reportedly supportive of such remarks and has been accused of playing on racial anger to promote his policies.