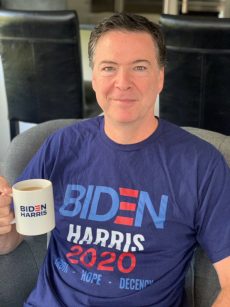 FBI Director James Comey is stirring the pot once again, tweeting a photo of himself with swag supporting former Vice President Joe Biden and his running mate, Sen. Kamala Harris of California. “Vote for your country,” said the vocal critic of President Trump, who notably fired him in 2017. The photo prompted thousands of responses. […]

President Trump has fired FBI director James Comey. In a letter, Trump said that Comey is “not able to effectively lead the bureau.” The Attorney General and his Deputy recommended the move, saying that Comey “was mistaken” going public about the Clinton email investigation. Democrats – many of whom said they’d also lost faith in […]

WASHINGTON – President-elect Donald J. Trump said Tuesday that intelligence officials had delayed briefing him on their conclusion that Russia interfered in the 2016 election and suggested, with no evidence, that they might be buying time to assemble a more substantial case. The "Intelligence" briefing on so-called "Russian hacking" was delayed until Friday, perhaps more […] 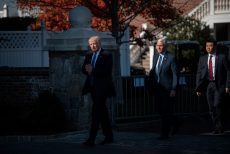 WASHINGTON – President-elect Donald J. Trump repeatedly said Hillary Clinton ‘s “lies and deception” rivaled Watergate. He called her “Crooked Hillary.” His most rabid fans chanted it over and over again at huge campaign rallies: “Lock her up!” But on Tuesday, Mr. Trump essentially said: “never mind,” signaling that he does not intend to pursue […]