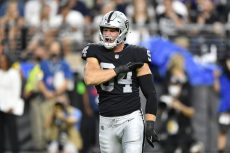 Carl Nassib started his Monday night by making history as the first openly gay athlete to play in a regular-season NFL contest. He ended it hours later by making the game’s most important defensive play, forcing an overtime fumble that led to his Las Vegas Raiders scoring a thrilling 33-27 victory over the visiting Baltimore […]