The Pentagon on Friday confirmed it mistook a civilian vehicle for an ISIS-K threat when it launched a drone strike on Aug. 29 in Kabul that killed 10 civilians. “I am now convinced that as many as 10 civilians, including up to seven children, were tragically killed in that strike,” U.S. Central Command head Gen. Frank […]

A Pentagon police officer was killed in a “shooting event” outside the Defense Department headquarters Tuesday morning, a defense official confirmed to Fox News. The Associated Press reported that the officer was stabbed by the suspect, who was shot and killed at the scene by law enforcement. The connection between the shooting and the stabbing […]

WASHINGTON (AP) — In an extraordinary rebuke of President Donald Trump, all 10 living former secretaries of defense cautioned Sunday against any move to involve the military in pursuing claims of election fraud, arguing that it would take the country into “dangerous, unlawful and unconstitutional territory.” The 10 men, both Democrats and Republicans, signed on […] 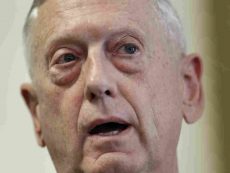 Defense Secretary Jim Mattis, seen here in June, has been relatively quiet about President Trump’s call for a ban on transgender service members in the U.S. military. New guidelines would give him leeway to determine who should serve. Transgender members of the U.S. military would be subject to removal at Defense Secretary James Mattis’ discretion […]

President Trump and Defense Secretary James Mattis speak at the Inauguration Day parade on Jan. 20. Trump heads to the Pentagon on Friday and is expected to speak with Mattis and the military brass about his campaign pledge for a stepped-up war against the Islamic State. Donald Trump paid his first presidential visit to the […]

MANAMA, Bahrain – The United States is sending additional troops to Syria, nearly doubling the Pentagon’s presence there, to help thousands of Kurdish and Arab fighters massing for an assault on the Islamic State’s stronghold of Raqqa, Defense Secretary Ashton B. Carter said here on Saturday. Mr. Carter said the reinforcements would include American commandos […] 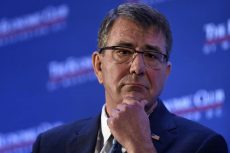 Defense Secretary Ash Carter ordered the Pentagon on Wednesday to stop clawing-back the bonuses that thousands of soldiers got for reenlisting to serve in Iraq and Afghanistan. “There is no more important responsibility for the Department of Defense than keeping faith with our people,” Carter said in a statement. “Today, in keeping with that obligation, […]

After giving thousands of California soldiers bonuses for re-enlisting in the National Guard, the Pentagon is now asking soldiers to return the money they were paid almost 10 years ago, according to a new report. The payments came during the wars in Iraq and Afghanistan when the Pentagon feared a shortfall of troops, according to […]