President Trump signed an executive order Thursday that is intended to provide more options for people shopping for health insurance. The president invoked his power of the pen after repeated Republican efforts to repeal the Affordable Care Act, also known as Obamacare, have failed. “The competition will be staggering,” Trump said. “Insurance companies will be […]

President Donald Trump has arrived in Puerto Rico where he will tour the island, two weeks after Hurricane Maria carved a path of destruction across the island. The president said he will meet with Federal Emergency Management Agency and military officials, first responders and the people of Puerto Rico. Additionally, he said the governor of […]

The Supreme Court agreed late Tuesday to lift restrictions on President Trump’s travel ban until further notice, allowing the administration to continue barring most refugees under the ban. The court granted the government’s request to block a federal appeals court ruling that said the administration cannot ban refugees who have formal assurances from resettlement agencies or are in the U.S. Refugee […]

Thanking local government officials and emergency response leaders in Texas Tuesday for their actions in the aftermath of Hurricane Harvey, President Donald Trump stopped short of offering his “congratulations” for a job well done, saying that there is still work left to do. “We won’t say congratulations. We don’t want to do that. We don’t […]

How is Washington spending tax dollars that might benefit President Trump? Democrats on the House Oversight and Government Reform Committee want to count the ways. The committee’s 18 minority members sent letters on Tuesday to the 15 cabinet departments and nine independent executive branch agencies, requesting documents on their spending at “businesses owned by or […] 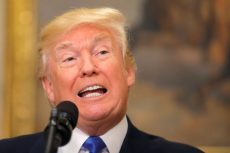 WASHINGTON — President Trump backed a sweeping plan Wednesday to halve legal immigration to the United States, flanked by the two Republican senators who crafted the bill. “As a candidate I campaigned on creating a merit-based immigration system,” Trump said. He added that the legislation, called the RAISE Act, would be the “most significant reform […]

The head of the Boy Scouts of America apologized Thursday to the organization’s members, telling them that the group did not intend to showcase the “political rhetoric” in President Trump’s speech to the National Jamboree earlier this week. “I want to extend my sincere apologies to those in our Scouting family who were offended by […]

The presidential commission investigating alleged election fraud has released 112 pages of unredacted emails of public comment, raising further privacy concerns amid a legal challenge to the panel’s request for sensitive voter data. In many cases, the emails, which are largely critical and often mocking of the Presidential Advisory Commission on Election Integrity led by […] 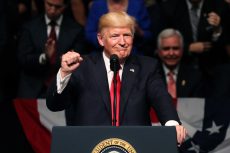 President Donald Trump unleashed a series of tweets Sunday morning, touting a poll that showed him with a 50% approval rating, which he said was higher than his predecessor. The new Rasmussen Poll, one of the most accurate in the 2016 Election, just out with a Trump 50% Approval Rating.That’s higher than O’s #’s! But […]