House Speaker Nancy Pelosi (D-Calif.) said capitalism isn’t serving the U.S. as it should. On Friday at the Chatham House in London, the Democrat explained how the U.S. economy hasn’t benefited from capitalism. She insisted the U.S. can’t have a system that benefits some by depending on the exploitation of workers and the environment. “In […] 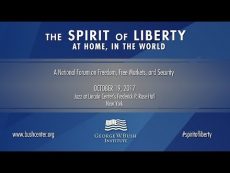 You might say George W. Bush wants to make America great again. In remarks Thursday, he criticized the kind of politics, sentiment and populism that led to President Trump’s rise and election — though he never named Trump explicitly. “Bigotry seems emboldened,” Bush said in New York at a forum put on by the George […]