Hurricane Irma has begun its assault on Florida as a category 4 storm, lashing the area with winds near 130mph (215km/h) and drenching rain. Millions of people huddled in shelters or in battened-down homes in preparation as Irma’s northern eyewall – the area just outside the eye of the storm, where the most damaging winds […] 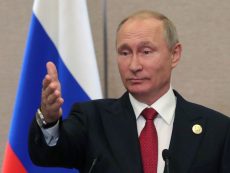 After weeks of secret negotiations, the US Senate has released its draft of a bill that could upend the healthcare system for millions of Americans. The Senate’s 142-page proposal, unveiled on Thursday, would eliminate or reduce key benefits provided by Barack Obama’s Affordable Care Act; lower taxes for the wealthy; strip funding from the women’s […] 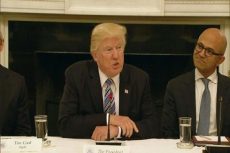 The governor of Puerto Rico, Ricard Rosselló, has announced that he is to visit Washington in the next phase of his campaign to turn the island into the 51st state of the United States. Rosselló will go to the US capital armed with a 97% backing for statehood from voters in Sunday’s plebiscite on the […]

Donald Trump has told Theresa May in a phone call he does not want to go ahead with a state visit to Britain until the British public supports him coming. The US president said he did not want to come if there were large-scale protests and his remarks in effect put the visit on hold […]

Donald Trump has criticised the mayor of London, hours after seven people were killed and 48 injured in a terror attack in the centre of the city. “At least 7 dead and 48 wounded in terror attack,” the president wrote on his personal Twitter account, “and Mayor of London says there is ‘no reason to […]

Vladimir Putin has given his broadest hint yet that Russia may have played a role in the hacking of western elections but emphatically denied that his government was involved. Speaking at the St Petersburg economic forum, the Russian president acknowledged that it was “theoretically possible” that “patriotic” Moscow hackers might have interfered in foreign polls. […]

Nigel Farage is a “person of interest” in the US counter-intelligence investigation that is looking into possible collusion between the Kremlin and Donald Trump’s presidential campaign, the Guardian has been told. Sources with knowledge of the investigation said the former Ukip leader had raised the interest of FBI investigators because of his relationships with individuals […]