Treasury Secretary Janet Yellen said Sunday that there is a “risk” that US gas prices could rise again later this year, as fears grow over the possibility that Americans’ wallets could be strained by a spike in prices similar to the one seen this summer. “Well, it’s a risk. And it’s a risk that we’re […]

The White House Council of Economic Advisers said on July 21 that even if Friday’s advance estimate of the country’s GDP is negative, it’s still “unlikely” to be indicative that the country is in a recession. Recessions refer to two consecutive quarters of negative economic growth. In a blog post, the council of economic advisers […] 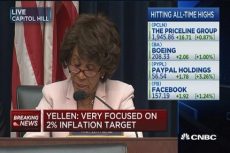 The Federal Reserve could scale back on its expected pace of interest rate hikes if inflation continues to be soft, Chair Janet Yellen told Congress. Under questioning over why the central bank remains committed to normalizing policy even as price and wage pressures remain muted, Yellen said the Fed is aware of the softness in […]