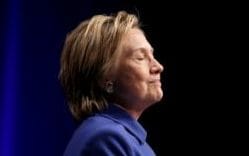 Mike Bloomberg could team up with Hillary Clinton to try to take down President Trump in November — by making her his running mate.

Bloomberg’s internal polling has found the combo “would be a formidable force,” campaign sources told the Drudge Report Saturday.

Clinton, who lost her 2016 White House bid to Trump despite winning the popular vote, said last week that she would “probably” not accept an offer to run as another Democrat’s veep.

“I never say never because I believe in serving my country,” she told talk show host Ellen DeGeneres. “But it’s never going to happen.”

But the former New York mayor may press the question.

Clinton and Bloomberg were spotted together in December at a dinner with daughter Chelsea, Page Six reported – supposedly to celebrate the birthday of socialite Annette de la Renta.