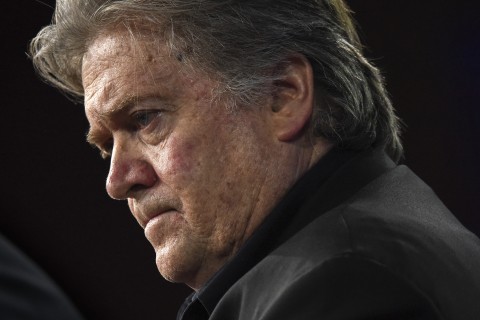 In the three years before he became Donald Trump’s chief strategist, Stephen K. Bannon lived as a virtual nomad in a quest to build a populist political insurgency.

No presidential adviser in recent memory has followed such a mysterious, peripatetic path to the White House. It was as though he was a man with no fixed address.

He owned a house and condo in Southern California, where he had entertainment and consulting businesses, a driver’s license and a checking account. He claimed Florida as his residence, registering to vote in Miami and telling authorities he lived at the same address as his third ex-wife.

At the same time, he routinely stayed in Washington and New York as he engineered the expansion of Breitbart News and hosted a live Breitbart radio program. By 2015, Bannon stayed so often at Breitbart’s townhouse headquarters on Capitol Hill that he kept a picture of a daughter on a mantle piece, beneath a portrait of Abraham Lincoln.

The issue of Bannon’s legal residency has been simmering since last summer, shortly after he became chief executive of Trump’s campaign. The Guardian reported in an Aug. 26 story that he was registered to vote at a then-vacant house and speculated that Bannon may have signed an oath that he was a Florida resident to take advantage of the state’s lack of state income taxes.

In California, where Bannon had lived and owned property for more than two decades, income tax can exceed 12 percent.

Bannon has not responded to repeated requests by The Washington Post to discuss the matter. Two Post reporters sought to independently verify his residency claims, using a wide array of publicly available information.