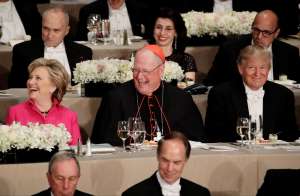 UPDATE: After earning hearty laughs for many of his early jokes at the annual Al Smith dinner, Donald Trump appeared to lose the crowd as he crossed the line from jokes to deeply personal insults aimed at rival Hillary Clinton.

Trump was repeatedly booed when he described Clinton as corrupt and latched onto information contained in hacked emails from her staff. That included a hit on Clinton for “pretending” not to hate Catholics as she sits at a Catholic charity event.

The venue Thursday night just 24 hours after their third and final debate is the annual Alfred E. Smith Memorial Foundation Dinner in New York, a white-tie gala that every four years becomes a showcase for presidential politics. Tradition dictates that the candidates deliver humorous remarks poking fun at each other and themselves, a jovial custom that seems hard to envision amid such an ugly campaign.