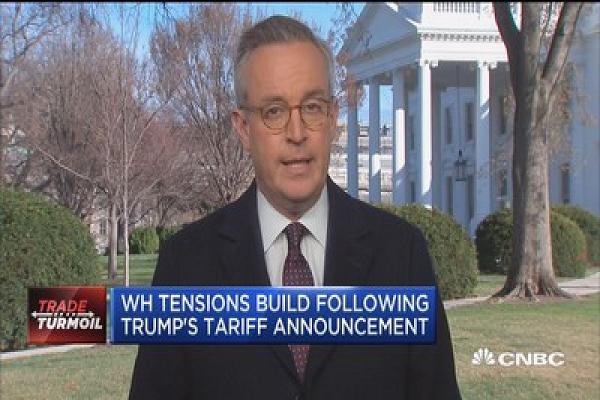 President Donald Trump’s decision on Thursday to impose hefty tariffs on imports of steel and aluminum was as much of a surprise for the White House as it was for everyone else, NBC News reported Friday.

Trump unilaterally made the decision to announce the new taxes on foreign imports in a fit of rage about a number of other issues that were weighing on his administration. Citing an internal document, NBC reported that White House lawyers and staff had not conducted any review of the drastic change Trump suddenly made to U.S. trade policy.

The day before, Trump campaign veteran Hope Hicks announced plans to resign as White House communications director. Hicks had reportedly been berated by Trump after she testified before the House Intelligence Committee that she had to tell “white lies” for the president.

Trump had also recently resumed his ongoing attacks against his attorney general, Jeff Sessions, tweeting on Wednesday that Sessions’ recent decision regarding a probe into potential FBI surveillance abuses was “disgraceful.”

And it was revealed this week that Trump’s son-in-law, Jared Kushner, recently had his top-level interim security clearance downgraded — along with a number of other White House aides with the same temporary status.

An official familiar with the president’s state of mind said Trump became “unglued” by Wednesday evening.