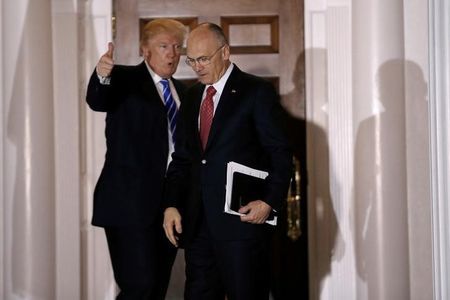 WASHINGTON (Reuters) – President-elect Donald Trump will name fast-food executive Andy Puzder to head the U.S. Department of Labor, according to a source familiar with the matter, in an appointment likely to antagonize organized labor.

Puzder, chief executive of CKE Restaurants Inc [APOLOT.UL], which operates the Carl’s Jr. and Hardee’s fast-food chains, has been a vociferous critic of government regulation of the workplace.

Puzder frequently publishes commentary and gives television interviews in which he argues that higher minimum wages would hurt workers by forcing restaurants to close, and praises the benefits of automation in the fast-food industry.

Fast-food workers, who are largely not unionized, are engaged in a multi-year campaign known as the “Fight for $15,” which is supported by labor unions, to raise minimum wages to $15 per hour. They have had state-wide successes in New York and California and in cities and municipalities such as Seattle.