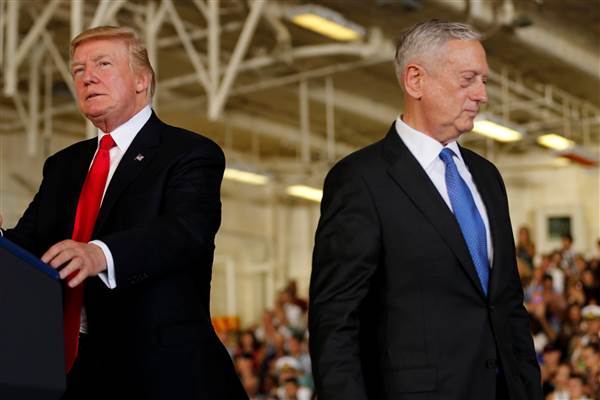 WASHINGTON — President Donald Trump has become increasingly frustrated with his advisers tasked with crafting a new U.S. strategy in Afghanistan and recently suggested firing the war’s top military commander during a tense meeting at the White House, according to senior administration officials.

During the July 19 meeting, Trump repeatedly suggested that Defense Secretary James Mattis and Chairman of the Joint Chiefs of Staff Gen. Joseph Dunford replace Gen. John Nicholson, the commander of U.S. forces in Afghanistan, because he is not winning the war, the officials said. Trump has not met Nicholson, and the Pentagon has been considering extending his time in Afghanistan.

Over nearly two hours in the situation room, according to the officials, Trump complained about NATO allies, inquired about the United States getting a piece of Afghan’s mineral wealth and repeatedly said the top U.S. general there should be fired. He also startled the room with a story that seemed to compare their advice to that of a paid consultant who cost a tony New York restaurateur profits by offering bad advice.

Trump is the third president to grapple with the war in Afghanistan. On Wednesday, two American troops were killed in Afghanistan when a convoy they were in came under attack. The Taliban claimed responsibility for the attack.

Trump’s national security team has been trying for months to come up with a new strategy he can approve. Those advisers are set to meet again to discuss the issue on Thursday at the White House. The president is not currently scheduled to attend the meeting, though one official said that could change.

Former presidents Barack Obama and George W. Bush went through multiple strategies over the course of their presidencies to try to stabilize Afghanistan. What set Trump apart in the July meeting was his open questioning of the quality of the advice he was receiving.