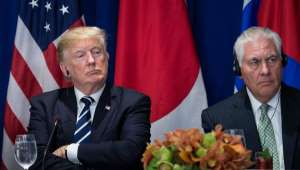 President Donald Trump questioned whether FCC licenses should be taken from NBC television stations after the network published a story on Wednesday saying he had sought a large increase in the U.S. nuclear arsenal.

Trump denied the report in a Twitter post. NBC said that Trump made his remarks about the arsenal at a meeting with his national security advisers on July 20, and that Secretary of State Rex Tillerson called him a “moron” after he left.

“Fake @NBCNews made up a story that I wanted a ‘tenfold’ increase in the U.S. nuclear arsenal. Pure fiction, made up to demean. NBC=CNN,” he said in a tweet.

Subsequently, he raised the prospect of withdrawing FCC licenses. NBCUniversal, the parent company of the network, is owned by Comcast Corp.

“With all of the Fake News coming out of NBC and the Networks, at what point is it appropriate to challenge their License? Bad for country!” he said in a second tweet.