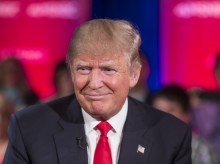 “How low has President Obama gone to tapp [sic] my phones during the very sacred election process. This is Nixon/Watergate. Bad (or sick) guy!” — President Trump, tweet, March 4, 2017

President Trump’s explosive allegation that former president Barack Obama wiretapped him is based on — what?

That has been the question ever since Trump sent provocative early-morning tweets over the weekend, because he and his staff have provided no evidence.

However, in calling for a congressional investigation of apparent Russian meddling in the election to also look into Trump’s allegation, White House press secretary Sean Spicer on Sunday referred to “reports concerning potentially politically motivated investigations.” That suggests the tweets were based on media reports, not information the president might have received from inside the government.

Our colleague Robert Costa has reported that White House aides have internally circulated an article on Breitbart titled “Mark Levin to Congress: Investigate Obama’s ‘Silent Coup’ vs. Trump.” Breitbart is a right-leaning news organization that is a rather unreliable source of information. Often the material that is published is derivative and twisted in misleading ways.

However, a White House spokesman told The Fact Checker that the White House instead is relying on reports “from BBC, Heat Street, New York Times, Fox News, among others.” He provided a list of five articles.