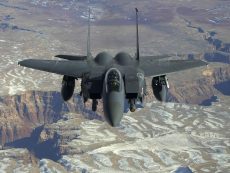 Qatar is currently isolated within the region by neighbours which accuse it of sponsoring terrorism The US has sold Qatar $12bn (£9.4bn)-worth of fighter jets just days after President Donald Trump accused the country of being a “high-level” sponsor of terrorism. The deal was signed off by the US Defence Ministry and reportedly included 36 F-15 combat aircraft. […]