Two suitcases full of methamphetamine were found in a Washington state forest on Monday, officials said — though it’s still a mystery as to how huge haul of drugs got there. The luggage was discovered in a “heavily brushy area” of the Okanogan National Forest, located in the north-central part of the state, near the […] 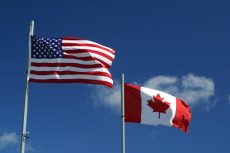 A vote in North Carolina to bring an outsized American flag into compliance with a city code has failed to diminish the controversy surrounding the Star-Spangled Banner. Gander RV in Statesville is now facing a fine of $50-a-day for displaying a flag that violates the city’s size limit on flags in a highway business zone. […]

Federal authorities seized 15,000 kilos of cocaine, worth as much as $1 billion, at a Philadelphia shipping port, officials said on Tuesday. There were 16.5 tons of the drug found in seven shipping containers late Monday night, officials said. “This is one of the largest drug seizures in United States history,” U.S. Attorney for the […]

The bill was introduced by Rep. Steve Hurst, a Republican representing Calhoun County, who said that if he had his way, offenders would be permanently castrated through surgery. “If they’re going to mark these children for life, they need to be marked for life,” Hurst told NBC affiliate WSFA of Montgomery. “My preference would be […]

A fourth U.S. tourist died after he fell critically and suddenly ill at an all-inclusive resort in the Dominican Republic about a month before three others died in their rooms, Fox News has learned. Robert Bell Wallace, 67, of California, became ill almost immediately after he had a scotch from the room minibar at the […]

A statue of Confederate Gen. Robert E. Lee was sold online for more than $1.4 million on Wednesday after it was removed from a Dallas park nearly two years ago over concerns the monument was racist. The bronze statue drew a top offer of $1,435,000 from a bidder identified only as “LawDude,” according to the […]

Video taken during an anti-Trump protest in central London on Tuesday captured a group of men assaulting and knocking an elderly fan of President Trump to the ground. The video showed a mob surrounding the man, then pushing him to the ground as they chanted “Donald Trump’s not welcome here,” during the rally in Parliament […]

A young Tennessee mother, 19, has received two years’ probation for putting her 8-month-old baby in a freezer while allegedly under the influence, then closing the lid, according to a report. FOX 35 ORLANDO reported that Brittany Smith was facing felony charges of aggravated child abuse and neglect. She pleaded guilty to a reduced charge […]

Former Marjory Stoneman Douglas High resource officer Scot Peterson, 56, was arrested Tuesday on charges relating to failure to enter the school during the mass shooting there. He was charged in Broward County with seven counts of neglect of a child, three counts of culpable negligence and one of perjury after a 15-month investigation, according […]

About four in 10 American now say that President Trump should be impeached and removed from office, according to a CNN poll conducted by SSRS. The survey, which was released early Sunday, found that 41 percent of Americans said that the president should be impeached based on what they have read or heard. The figure […]

Virginia Beach officials have identified the 12 people killed Friday night when a lone gunman entered a municipal building and opened fire with a handgun. Dave Hansen, City Manager of Virginia Beach, said that all but one of the victims were employees, most of whom he knew personally. “Sixteen Hours ago the lives of 12 […]