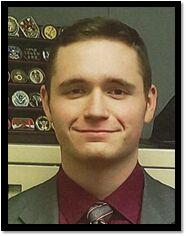 A 22-year-old Missouri police officer who was still in training died after a man who was wanted by authorities shot him.

“It’s always been a really good, tight-knit community – for the most part – in neighborhoods,” Connie Donahoo, who lives nearby where the shooting took place in Independence, Missouri, told KCTV. “But, it just seems like everything is out of control now. Everybody’s scared. Everybody’s on edge. And, we just want peace and quiet in our city.”

Police were called to a residence at about 11:30 a.m. on Wednesday after receiving a tip that a wanted man was in the area. Officers reportedly came across a male suspect who opened fire on authorities.

Officer Blaize Madrid-Evans was shot and subsequently taken to the hospital with critical injuries. He died later Wednesday evening following the shooting.

Police identified the shooter as 33-year-old Cody L. Harrison of Gladstone, Missouri, who was shot and killed by another police officer when he opened fire on Madrid-Evans.

The Missouri Department of Corrections list Harrison as wanted and “out of custody,” but did not provide additional details on Harrison’s arrest record. The department did not immediately respond to Fox News’s request for additional comment on Harrison.

back the blue, kia, line of duty, thin blue line