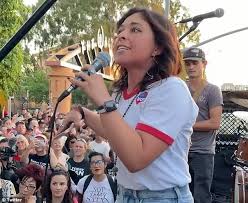 A conservative Disneyland worker accused the entertainment giant of stifling non-woke viewpoints among staff – as parents held a protest outside its California headquarters for pushing gender ideology on children.

Hundreds gathered outside Disney’s headquarters in Burbank, California with at least one Disneyland worker, known as a ‘cast member’ speaking out against her employer.