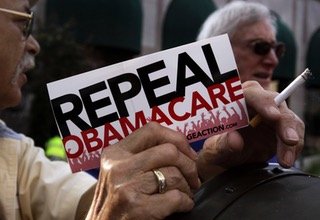 Vice President-elect Mike Pence says that the first priority of President-elect Donald Trump is to repeal and replace the Affordable Care Act, better known as Obamacare. But Democrats say the incoming administration has nothing to replace it with, and that repealing the law will only lead to “chaos.”

“Obamacare has failed,” Pence said after a meeting with House Republicans on Wednesday. “Now is the time to keep our promises. Step one will be to repeal Obamacare.”

“Today, our message is very simple,” Pence said. “We’re going to be in the promise-keeping business. … We’re going to keep our promise to the American people — we’re going to repeal Obamacare and replace it with solutions that lower the cost of health insurance without growing the size of government.”