NEW YORK — Supporters of former San Francisco 49ers quarterback Colin Kaepernick, who refused to stand for the national anthem to protest police brutality against black people, showed their solidarity with him and his cause at a rally outside NFL headquarters Wednesday, demanding that he be signed by the start of the regular season next […] 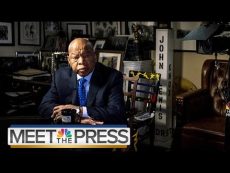 A growing group of Democratic lawmakers will boycott President-elect Donald Trump’s inauguration Friday to protest what they described as his alarming and divisive policies, foreign interference in his election and his criticism of civil rights icon John Lewis, a congressman from Georgia. There are now more than 60 House Democrats — 65, at last count […]

Blue Lives Matter, a group of active and retired law enforcement officials, issued a statement on Monday demanding all Americans boycott Ben & Jerry’s after the ice cream maker announced its public support of Black Lives Matter last week. “Ben & Jerry’s went beyond making a statement in support of civil rights when they actively […]