Pollsters and pundits for weeks warned of an impending “red wave” – an electoral Republican rout which would deliver a harsh rebuke of Joe Biden and the Democrats. As the sun rose across the US on Wednesday, however, it became clear that the “tsunami” Republicans had hoped for never materialised. While the party has made […]

After months of primaries, campaign events and fundraising pleas, the midterm elections that will determine the balance of power in Washington and state capitals are finally here. Republicans are predicting a massive red wave as anxious Democrats defend their narrow majorities in Congress while struggling to overcome pervasive concerns about the economy, crime and President […]

A center-left identifying think tank linked to big names in the Democratic Party is warning that voters see the party as too extreme – a problem that has the potential to hurt them for years to come. First reported by Axios, a memo from Third Way looks at the results of a recent October poll […]

Democrats took the unusual (but not unprecedented) step of meddling in a number of Republican primaries this year. The idea was to encourage GOP primary voters to pick far-right candidates whom Democrats could ultimately clobber in November. The effort was controversial from the start. The Republican candidates the Democrats were spending money to promote were […]

Billionaire industrialist Elon Musk took over Twitter Thursday night and immediately fired several top executives, sending shockwaves throughout the social media platform. CEO Parag Agrawal, CFO Ned Segal and head of legal policy, trust, and safety Vijaya Gadde were all fired after Musk had accused them of misleading him and investors over the number of […]

President Joe Biden is in a bind. He has no choice but to talk about the economy in the home stretch of the midterm elections – it’s the issue, given near 40-year high inflation and high gas prices, that worries voters most. But by doing so, he’s drawing attention to his own and Democrats’ biggest […] After a week of momentum at the polls, President Joe Biden saw a significant dip in his approval ratings due largely to Democrats and independents. According to the latest The Economist / YouGov poll on Wednesday, Biden’s net approval fell 14 points to 39 percent. Earlier, Biden had an unusually high approval rating from “less […] Voters trust the Republican Party to better handle more key issues affecting the country than they do Democrats, according to a poll. An ABC News/Ipsos survey conducted three months before November’s midterms found that people believe the GOP would do a better job in handling seven out of 11 key issues than the Democrats. The […]

As the countdown to November’s midterm congressional elections enters its final 100 days, Democrats face broad and persistent headwinds driven by widespread gloom over the economy and President Joe Biden’s consistently low approval ratings. Though recent polling has provided the party glimmers of hope, those fundamental weaknesses have been compounded by what many accept as […] A group of former Republican and Democratic officials are forming a new political party called Forward, in an attempt to appeal to what they call the “moderate, common-sense majority.” “Political extremism is ripping our nation apart, and the two major parties have failed to remedy the crisis,” David Jolly, Christine Todd Whitman and Andrew Yang […]

Republicans and Democrats are working to enhance outreach efforts as one important demographic — the Hispanic vote in America — comes into focus ahead of this fall’s midterm elections. In recent years, Hispanics and members of Latino communities across America have largely voted Democrat, but it appears a shift in support from the Democratic Party […] 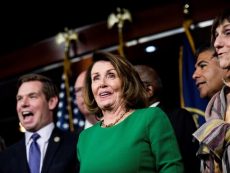 After months of various Democrats insisting inflation has peaked, House Speaker Nancy Pelosi (D-CA) said that Wednesday’s Consumer Price Index, which skyrocketed to 9.1 percent in June, was probably the real peak. Pelosi told reporters on Wednesday, “I think we’re peaking. I think we’re going to be going down from here.” The June CPI numbers […]