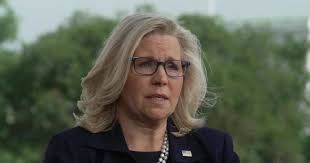 Malicious actor Liz Cheney is warming up for her starring role in the Nancy Pelosi production of the nationally televised Soviet-style show trials featuring the House Select Committee on the so-called “insurrection” which makes its primetime debut this week.

The embattled Wyoming congresswoman and daughter of former Vice President Dick Cheney has been carrying the torch of the discredited anti-Trump Republican establishment which has engaged in a de facto merger with the Democratic party to block the former president from the 2024 ballot, with a return of a vengeful Donald J. Trump to the swamp being the ultimate nightmare scenario for the corrupt ruling political class.

Rep. Cheney was given a forum by CBS News to smear and slander Trump supporters and promote her conspiracy theories to fuel the J6 committee’s public spectacle which will pull out all the stops to convince as many gullible Americans as possible that the actions of a ragtag bunch of protesters – some of who got out of control – at the U.S. Capitol on January 6, 2021 as a legitimate coup to overthrow the entire government of the United States.