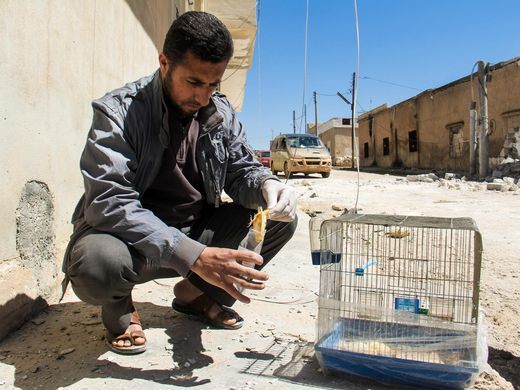 “I don’t want to say what I’m going to be doing with respect to Syria,” Trump told reporters en route to his Mar-a-Lago estate in Palm Beach, Fla., where he will host Chinese counterpart Xi Jinping for a summit over the next two days.

The increased activity about Syria represents an about-face for Trump, who had previously urged the United States to support Assad against the rebel groups fighting him, many which are aligned with al-Qaeda. Assad is also backed by Russia and Iran. Tuesday’s attack on a town in the northern Syrian province of Idlib shifted Trump’s outlook on Syria, spurring him to consider new options against the nation wracked by civil war.

Asked about whether Assad should step down, Trump said “I think what happened in Syria is a disgrace to humanity, and he’s there, and I guess he’s running things, so I guess something should happen.

“What Assad did is terrible,” Trump said. “What happened in Syria is truly one of the egregious crimes and it shouldn’t have happened. And it shouldn’t be allow to happen.”

Trump “is being presented with a lot of options,” White House spokesman Sean Spicer said, adding that Trump has not signed off on any specific plans.

Trump says ‘something should happen’ about Assad’s power in Syria