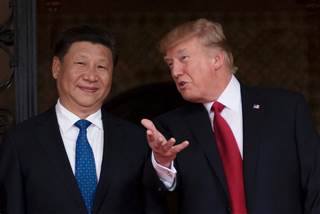 The United States is pushing China to the brink of a “new Cold War,” China’s foreign minister said as officials in the world’s two largest economies continue trading barbs over each other’s handling of the coronavirus pandemic.

“This dangerous attempt to turn back the wheel of history will undo the fruits of decadeslong China-U.S. cooperation, dampen American’s own development prospects, and put world stability and prosperity in jeopardy,” Foreign Minister Wang Yi said Sunday in a video news conference on the sidelines of the annual session of China’s National People’s Congress.

Wang blamed the worsening tensions on “some political forces in the U.S.” that were “taking China-U.S. relations hostage.”

He did not say what “political forces” he was referring to, but while Beijing in general seeks to safeguard the personal relationship between President Donald Trump and President Xi Jinping by not criticizing the U.S. leader, senior White House figures such as Secretary of State Mike Pompeo have been singled out for criticism.