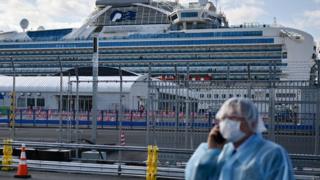 Two people diagnosed with COVID-19, the disease caused by the novel coronavirus, who were at one point on board a quarantined cruise ship have died, Japan’s health minister said in Parliament on Thursday.

Also, 13 more coronavirus cases were reported Thursday, bringing the total number of cases on the ship to 634.

The deaths appear to be the first involving cases from the Diamond Princess, which was quarantined off Yokohama with around 3,700 passengers and crew after a one-time passenger later tested positive for the virus.

Health Minister Katsunobu Kato offered his condolences to the family of the couple, who were both Japanese nationals — a man and a woman in their 80s.

The health ministry has also confirmed that two government officials who performed administrative duties on the cruise ship have tested positive for the virus.