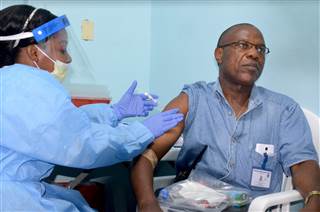 The drug company Pfizer said Monday that early analysis showed its vaccine candidate for Covid-19 is more than 90 percent effective at preventing infection.

The news from the U.S. pharmaceutical giant and its German partner, BioNTech SE, was welcomed as a major step in the fight against a virus that has plagued the global economy, upended daily life for billions and killed 1.26 million people — nearly 240,000 in the United States alone.

Pfizer and BioNTech said in a joint statement that their preliminary findings have shown higher success rates than many had expected. People who received two doses as part of the trial saw 90 percent fewer symptomatic cases of Covid-19 than participants who were given a placebo, they said.

President-elect Joe Biden said he welcomed the news, which he said he learned Sunday night, but warned it was “important to understand that the end of the battle against Covid-19 is still months away.”

Even if “some Americans are vaccinated later this year, it will be many more months before there is widespread vaccination in this country,” Biden said in a statement. “Today’s news does not change this urgent reality. Americans will have to rely on masking, distancing, contact tracing, hand washing, and other measures to keep themselves safe well into next year.”

The companies have not released the data backing up the study, and many experts urged caution before those details have been independently scrutinized.

“We are reaching this critical milestone in our vaccine development program at a time when the world needs it most with infection rates setting new records, hospitals nearing over-capacity and economies struggling to reopen,” he added.