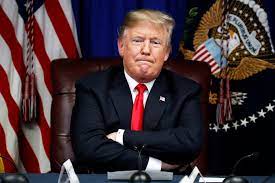 When Donald Trump formally declares his 2024 candidacy, he won’t just be running for another term in the White House. He’ll be running away from legal troubles, possible criminal charges, and even the specter of prison time.

In recent months, Trump has made clear to associates that the legal protections of occupying the Oval Office are front-of-mind for him, four people with knowledge of the situation tell Rolling Stone.

Trump has “spoken about how when you are the president of the United States, it is tough for politically motivated prosecutors to ‘get to you,” says one of the sources, who has discussed the issue with Trump this summer. “He says when [not if] he is president again, a new Republican administration will put a stop to the [Justice Department] investigation that he views as the Biden administration working to hit him with criminal charges — or even put him and his people in prison.”