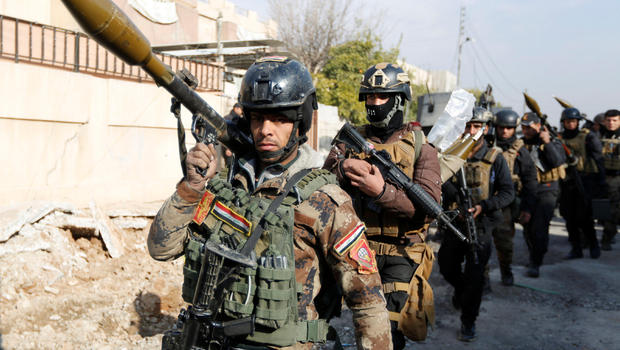 MOSUL, Iraq — Iraqi forces have won a string of swift territorial gains in Mosul in the fight against the Islamic State of Iraq and Syria (ISIS) after months of slow progress. Government troops retook the eastern edge of a third bridge in Mosul Saturday and a cluster of buildings inside Mosul University, according to a senior Iraqi officer overseeing the operation.

Iraqi forces now control the eastern sides of three of the city’s five bridges that span the Tigris river connecting Mosul’s east to west. Warplanes from the U.S.-led coalition bombed the city’s bridges late last year in an effort to isolate ISIS fighters in the city’s east by disrupting resupply routes. At Mosul University, senior commanders said that Iraqi forces have secured more than half of the campus Saturday amid stiff resistance, but clashes were ongoing into the afternoon. Iraqi forces entered the university from the southeast Friday morning and by nightfall had secured a handful of buildings, Brig. Gen. Haider Fadhil and Lt. Gen. Abdul-Wahab al-Saadi said on a tour of the university Saturday. “We watched all the (ISIS) fighters gather in that building, so we blew it up,” said special forces Sgt. Maj. Haytham Ghani pointing to one of the blackened technical college buildings where charred desks could be seen inside. “You can still see some of their corpses,” he added.