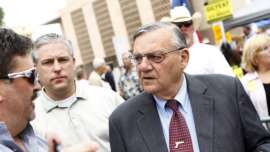 U.S. District Court Judge Susan Bolton issued an order Thursday shutting down requests by the sheriff’s attorneys to have the facts behind the conviction thrown out after the pardon.

Bolton said in the order that Trump’s pardon was an “executive prerogative of mercy, not of judicial recordkeeping,” according to Politico.

“The pardon undoubtedly spared Defendant from any punishment that might otherwise have been imposed. It did not, however, ‘revise the historical facts’ of this case,” Bolton wrote.

Trump pardoned the 85-year-old former Maricopa County, Ariz., sheriff in August after he was found guilty of criminal contempt for disobeying court orders regarding his department’s handling of immigration-related arrests.

Jack Wilenchik, Arpaio’s attorney, said he will challenge the judge’s order Thursday in an effort to clear Arpaio’s name in the case.